Despite the frequently asked questions attached to the end of Garrett's essay, some confusion still exists as to what Ajax really is. Put simply, Ajax is nothing more than an approach to web interaction. This approach involves transmitting only a small amount of information to and from the server in order to give the user the most responsive experience possible.

Instead of the traditional web application model where the browser itself is responsible for initiating requests to, and processing requests from, the web server, the Ajax model provides an intermediate layer — what Garrett calls an Ajax engine — to handle this communication. An Ajax engine is really just a JavaScript object or function that is called whenever information needs to be requested from the server. Instead of the traditional model of providing a link to another resource (such as another web page), each link makes a call to the Ajax engine, which schedules and executes the request. The request is done asynchronously, meaning that code execution doesn't wait for a response before continuing.

When the Ajax engine receives the server response, it goes into action, often parsing the data and making several changes to the user interface based on the information it was provided. Because this process involves transferring less information than the traditional web application model, user interface updates are faster, and the user is able to do his or her work more quickly. Figure 1-1 is an adaptation of the figure in Garrett's article, displaying the difference between the traditional and Ajax web application models. 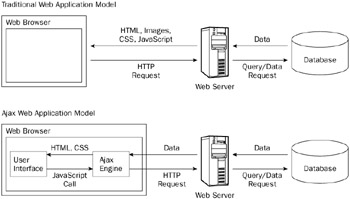